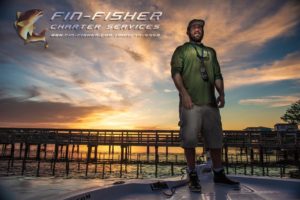 Fin-Fisher Charter Services was formed in 2015 by USCG approved Captain Shane Britt. Fin-Fisher Charter Services was named after Captain Shane’s two son’s Finlynn (Fin) and Fisher. Capt. Shane is fully licensed and insured and certified in CPR and first aid. Capt. Shane comes from a long line of commercial fishermen in his family, being one himself since 2012. He spent most of his childhood on the water learning to navigate the backwaters of local Brunswick County waters. He has been a true pleasure angler and tournament angler since he was in his early teens. He has competed and placed in many tournaments ranging from inshore flounder tournaments to offshore king mackerel tournaments.

Capt. Shane is best known for his hand made Bucktail fishing lures that he has been making since 2013. You can find Britts Bucktails in many of the local shops here on the coast and are favored by many of the local anglers. In 2014 he decided with his knowledge and passion it was time to make the move from commercial fisherman to charter boat Capt. He loves being on the water and teaching people the art of catching fish. Book today and let his passion for fishing turn into your obsession.

Felt good to get back in the saddle today tough bite but managed to coax this citation into biting and making the board for the @riggedandreadyfishingcenter trout tournament.

Glad you're back at it doing what you love! Nice fish!

Glad to see you back out there!!! Kevin and I need to book a day with ya! Tight Lines Brother!!!

Glad to see you back put em in da boat

Nice to see your smiling face.

Happy to see you back at it!!

You look great friend! So proud of you! Keep doing what your doing!!!💙

The time has come Capt. @iankillefer has to go back to school break is over today was a good day for him tho. He finally got that citation he’s been looking for and finished off with a limit on his afternoon trip. Now it’s back to reality and get back to work for me! To get in on the action visit www.fin-fisher.com or call 910-274-5458